(1888 - )
Pedigree Chart (interactive)
Geoffrey Mulgan was born in New Zealand in 1888.1
Copyright © 2011-23 by Don Ferguson. You may copy this information and make derivative works as long as you credit www.fergusontree.com for the original materials.

He married Angela Gabrielle Wanklyn in Oxford, Oxfordshire, on 10 July 1937.2,4

The following is taken from the NZ Dictionary of Biographies: -

When John was four, his father was appointed a leader writer for the Auckland Star and the family moved to Auckland. John attended Maungawhau School, and, after boarding at Wellington College from 1925, went on to Auckland Grammar School in 1927. He did well at school academically and in sport, especially rugby, boxing and cricket. In 1929 he won a university scholarship. He wrote prolifically for student publications in Auckland.
In 1931 he was nominated for a Rhodes Scholarship, but the selection committee thought him too young and advised him to come back the following year. When nominations were called for at Auckland University College in 1932, Mulgan's name was submitted by the students' association. Inexplicably, the professorial board gave the nomination to two other men. The selection committee in Wellington refused to award any scholarship, the chairman, Lord Bledisloe, expressing the view that all the applicants were inferior to Mulgan. He graduated BA in 1933, but again missed selection. In October, backed by his father, he sailed for England and took up residence at Merton College, Oxford.

In July 1935 he was awarded a first in English, and accepted a position with the Clarendon Press. There he was responsible for commissioning and overseeing the production of scholarly works. The impulse to publish found outlet in his anthology 'Poems of freedom' (1938), and also in 'The emigrants' (1939), an account of early travellers to New Zealand, in which he collaborated with Hector Bolitho. He also wrote his novel 'Man alone' at this time.

During these years Mulgan followed with close interest the progress of fascism in Europe. In 1936 the New Zealand government had appointed him an observer at the League of Nations in Geneva, and in collaboration with his close friend, Geoffrey Cox, he contributed regular articles on foreign affairs to the Auckland Star under the title 'Behind the cables'. His perception that war was inevitable impelled him to volunteer for the Territorial Army in 1938, and he was gazetted second lieutenant in the Oxford and Buckinghamshire Light Infantry. When war came in 1939 he reported immediately to his regiment. His wife and child he sent to safety in North America in June 1940; they eventually reached New Zealand in 1941 and remained there.

In 1942 he succeeded in getting himself transferred to the 4th Battalion of the Queen's Own Royal West Kent Regiment, which was proceeding to the Middle East. Now a major, he became the battalion's second in command. Over the next eight months Mulgan witnessed the mostly poor performance of a series of commanding officers from the regular army. The final appointee, it seemed to him, was the worst of all, and a danger to his men. He conveyed his opinion to general headquarters, at the same time seeking a transfer for himself.

In May 1943 he accepted a posting to Force 133, the British unit assisting the Greek partisans to harass the German occupation forces. Mulgan parachuted into Thessalía in September 1943 and set up his command post on Mt óthris. He gained the confidence of the local bands, mounting sabotage operations against road and rail traffic. The climax came in September and October 1944, when the German withdrawal was in progress. Mulgan's men, armed only with small arms and mortars, halted an entire German division for several days, destroying much of its transport and inflicting heavy casualties. Subsequently Mulgan was awarded the Military Cross.

Recalled to Cairo in November, Mulgan was negotiating a transfer to the 2nd New Zealand Division in January 1945 when he received promotion to the rank of temporary lieutenant colonel, and orders to return to Athens to locate and compensate the Greeks who had fought for Force 133. It proved a melancholy task. The civil war had raged in his absence; the English were now disliked. Mulgan seems to have become increasingly disillusioned as he observed the chaos resulting from war and what seemed to him the failure of socialism. He completed at this time the manuscript of his memoir, 'Report on experience', which he posted to his wife in New Zealand.

In mid April 1945 he was back in Cairo, billeted at a hotel. On 26 April he was discovered dead in his bed: he had taken an overdose of morphia. In December a consular court brought in a verdict of suicide. He was buried in the military cemetery at Heliopolis.5,6

(1861 - 1932)
Pedigree Chart (interactive)
Sarah Ann Murphy was born in Dublin, Co. Dublin, in 1861. Her father was Francis Patrick MURPHY, a Sergeant in the Army Hospital Corps at the Royal Infirmary, who had married Mary Rebecca STRIDE on 8 Aug 1859 at St Paul's, Dublin. By 1867 her mother had married Walter STENT (RN seaman), but was widowed again by 1871.1,2 She was baptised on 13 January 1861 at Dublin, Co. Dublin.3
She was listed in the 1871 census at 5 Flying Bull Lane in Portsea, Hampshire, with her grand-father Daniel PRIDE (a retired butcher) and her mother Mary STENT (their housekeeper).1
She was listed in the 1881 census at 13 Woodland St in Portsea, Hampshire, with her mother Mary STENT (charwoman) and was working as a dressmaker.4

She married Ernest Edward Wicks, son of William Poulter Wicks and Sarah Elizabeth Buckingham, at the Registry Office in Portsea Island, Hampshire, on 24 June 1886. He gave his occupation as 'Ships Corporal, RN.5,6'

She was listed in the 1891 census as Head of Family at 9 Victoria St in Portsea, Hampshire; she actually described herself as housekeeper and 'wife' rather than 'Head of Family', even though her husband was not present (as he was aboard ship). Her children Hilda, Irene and Sydney were listed as living with her.7

She was listed in the 1901 census at 126 Sheldon Rd in Edmonton, Middlesex, with her husband Ernest; he was a Customs book-keeper. Their children Hilda, Irene, Sydney, Archibald and William were listed as living with them.8

She was widowed on the death of her husband Ernest between October 1905 and December 1905.9

She was listed in the 1911 census as Head of Family at 17 Durham Road in Edmonton, Middlesex. Her children Hilda, Sydney and William were listed as living with her.10

Sarah, as the mother of the groom, attended Sydney Ernest Wicks and Rose Emmeline Rust's wedding at Tanners End Mission Hall, Stalham Grove in Edmonton, Middlesex, on 22 May 1915.11 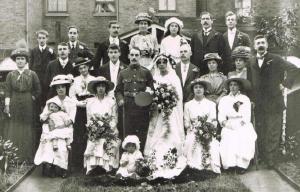 She was listed as the mother-in-law of Albert Victor Playford in the 1921 Census at 21 Oxford Rd in Enfield, Middlesex.12

Sarah's death was registered between January 1932 and March 1932 in Edmonton, Middlesex.13

(1912 - )
Pedigree Chart (interactive)
Edith Mary Murray was born in Hackney, London, Middlesex, on 3 February 1912.2,1
She was listed in the 1921 census at 60 Mountgrove Rd in Stoke Newington, London, Middlesex, with her father Thomas Ernest (a storekeeper) and mother Gertrude Mary.3

She was listed in the 1939 Register at 47 Auckland Rd in Potter's Bar, Hertfordshire, with Hugh Roland Miller; he was a stores manager and part-time unpaid ARP; she was a member of St Johns ambulance and full-time ARP warden.2