She married John Hardesty WATTS at the residence of Joseph Forsaith, Melbourne St in North Adelaide, South Australia, on 25 August 1881.3,4

Anna died on 29 December 1910 in Nth Adelaide, South Australia.5 She was buried on 30 December 1910 at the West Terrace Cemetery.6 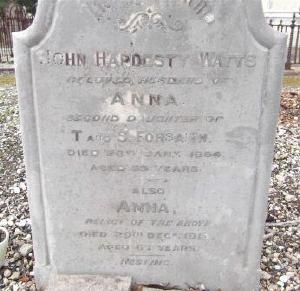 (1854 - 1919)
Pedigree Chart (interactive)
Annie Ada FORSAITH was born in Royston, Hertfordshire, on 30 August 1854.1,3,2
The siblings Fanny, Francis, Annie and Herbert were listed in the 1881 census at North Rd in Hertford St Andrew, Hertfordshire, with their parents, Robert Ekins FORSAITH and Sarah Lavinia BENDALL. Annie was a school teacher.3

She was listed in the 1891 census as Head of Family at 1 Unswick Rd in Hackney, London, Middlesex; she was Honorary Superintendent of a Girls' Home.4

Annie's marriage to Richard LANDER was registered in June 1892 in Hackney, London, Middlesex.1,5

(1860 - 1947)
Pedigree Chart (interactive)
Annie Maria FORSAITH was born in Hackney, London, Middlesex, on 2 January 1860.1,2,3
The siblings Josiah, Thomas, Mary and Annie were listed in the 1861 census at 7 Albert Row in Hackney St John, London, Middlesex, with their parents, Josiah FORSAITH and Mary ROOKE.4
The siblings Mary, Annie and Frederick were listed in the 1881 census at Whitford Rd, Lyndale in Croydon, Surrey, with their father Josiah FORSAITH.3

She was listed in the 1891 census at 17 Grand Parade in Eastbourne, Sussex, with her husband William; he was an architect and surveyor. Their children Arthur, Iris and Lois were listed as living with them, as was Annie's mother Mary ROOKE.7

She was named as a beneficiary of the will of Thomas Spencer FORSAITH, her uncle, dated 13 June 1898 in Parramatta, New South Wales; she was to receive a share of £100, split equally with her surviving siblings.8
She was listed in the 1911 census, visiting the household of Annie LARKINS at 98 Mt Pleasant Rd in Lewisham, London, Middlesex.9

She was listed in the 1939 Register at Byrn Rd in Swansea, Glamorganshire.12

Arthur's marriage to Ada SETCHFIELD was registered in 1936 in Ashfield, New South Wales.3

(1867 - 1952)
Pedigree Chart (interactive)
Arthur Ebenezer FORSAITH was born at Laura in Adelaide, South Australia, on 17 September 1867. Arthur was probably born before Thomas and Ada were married - his claimed birth year of 1868 does not agree with records.
The Sth Australian Birth index shows an Arthur James, son of Ada Mary Hall, father unknown, born 17/9/1867. Note, however, that in his 1906 New Zealand marriage he claimed to have been born in Melbourne, and for his 1908 marriage in Victoria, he gave a birthplace of Dunedin.1 He was baptised in Balmain, Sydney, New South Wales, on 1 October 1868.2

He married Agnes MAUD at the residence of Mr Cooper in Glenelg, Adelaide, South Australia, on 21 September 1897.3,4

Arthur's second marriage was to Hilda May Mildred CASE, daughter of Joshua CASE and Sarah A MASTERS, on 24 April 1906 in Auckland. Although this marriage is documented on their daughter's birth certificate, it does not appear in the NZ Marriage indexes. If it did occur, it would be bigamous, as Arthur was still married to Agnes; also, Arthur claims to have been born in Melbourne!5

Arthur's third marriage was to Charlotte Isabella HUMPHREY on 21 September 1908 in Collingwood, Melbourne, Victoria. This marriage certificate gives false details - Arthur claims to be born in Dunedin, his mother's maiden name is incorrect, but 2 stillborn sons are claimed. This appears to be his second bigamous marriage, and his daughter by Hilda CASE in New Zealand is still to be born.6

Arthur was divorced from Agnes MAUD at Perth, Western Australia, on 19 August 1912.
The proceedings, as reported in the West Australian newspaper, make interesting reading:
"THE STRONGEST PROOF. A MARRIAGE CERTIFICATE. INTERESTING PETITION IN DIVORCE. "AN UNUSUAL TRADE INQUIRY."
In the light of events which were exposed in the Divorce Court yesterday, Mrs. Agnes Forsaith apparently did well to preserve her marriage certificate, for that document has proved to be a substantial factor in clearing up what had appeared to Mr. Justice MacMillan to be a difficult point, and in releasing her from her marriage with Arthur Ebenezer Forsaith, formerly of Perth, on the ground of the latter's desertion. The case was one of many which have been before the Divorce Court recently under the new Divorce Act. When the case was before Mr. Justice MacMillan last week it was stated that respondent, with petitioner's consent, left Perth in 1905 for Adelaide for three months, on account of illness. At the end of that period he was to have returned, but since then she had not heard from him, nor had he supported her. It was stated also that respondent, since his marriage with petitioner, was about to enter into another marriage outside Western Australia, but was prevented from doing so. On the evidence then before him, however, his Honour was diffident about dealing finally with the case, and it was adjourned until yesterday morning, in order to permit of further inquiries being made. Mr. A. D. Stone appeared for petitioner. Two witnesses - Albert Kruger and O. L. Haines - yesterday supplied what might be termed the missing links in the chain of evidence. The former was able to inform the Court of the man's movements, while the latter witness related how respondent's alleged attempt to enter into a second marriage was frustrated. Albert Kruger told the Court that he knew respondent when the latter was in Perth. He (respondent) was then a printer and publisher. Witness was in Sydney at the end of April and at the beginning of May, and he then saw respondent in that city and spoke to him.
His Honour: Did he tell you anythng about himself? - No. I asked him where he was going; and he stated that he was leaving that day for Brisbane.
Did you know what his business was at that time? - No.
He did not mention his wife? - No.
Did he seem in good health? - Yes; excelllent.
O. L. Haines, the other witness, described himself as the managing director of the Trade Protection Association. He said that in 1906 he had inquiries from New Zealand, by his agent in that country, in regard to Arthur Ebenezer Forsaith. In Perth a meeting of respondent's creditors had been called under the Assignment Act, witness being trustee. He remembered perfectly the nature of the inquiry in question.
Mr. Stone: Did you reply to it? - Yes. "It was rather an unusual trade inquiry," added witness, when asked what it was that had impressed firmly on his mind the nature of the investigation. "It was stated that Forsaith was proposing marriage to the daughter of one of my agent's clients."
You forwarded to New Zealand a history of respondent while he was here? - Yes. Witness had some foolscap notes in his hand, but they were not read out.
With that letter in reply, what did you send? - A copy of his marriage certificate.
Did you hear any more about it? - No.
Mr. Stone submitted that on the evidence now before the Court, respondent, as far back as Sentember, 1906, had shown no intention whatever of returning to this State. His Honour said that on the evidence as it now stood desertion since 1906 had been proved, and a decree nisi, returnable in six months, would be granted. Petitioner was also granted the custody of her two children and costs against respondent."7,8

He registered a distribution and importing agency, the Commonwealth Speciality Sales Co, on 26 June 1915 at 77-79 Elizabeth St, Sydney - it is unclear what this company did or how long it existed.9

Arthur filed for divorce from Kathleen Leslie LEVAYNE at London, Middlesex, on 21 May 1909. The divorce petition cited adultery by Kathleen with Henry WILLIAMS and George ANNIS (uncontested) and decree nisi was granted 23 Mar 1910 with a final decree on 4 May 1914.9

He was listed in the 1911 census as Head of Family at 35 Southborough Rd in Hackney, London, Middlesex; he was now a free-lance journalist.11

Arthur's second marriage was to Lily CAMMEGH on 15 March 1919 in Kensington, London, Middlesex.1,12

Charlotte arrived in Melbourne on the Pioneer from New Zealand in March 1856 with her parents Thomas and Elizabeth.3

Charlotte was present at the wedding of Samuel Ludbrook CLARKE and Mary Lee (Hannah) CHRISTOPHER at 'Brick House', Queen St (home of the bride's mother) in Auckland on 30 June 1857.4,5,6,7,8

She was commited to an asylum in Dunedin for several weeks or months at a time during 1888 and possibly became a permanent inmate after 1890.14

She possibly married Frank Audley Henry BOYNTON, but it is unclear when or where this marriage may have taken place. He was probably born in Victoria in 1887 and died in WA in 1946, but his only recorded marriage was to Mary Elizabeth SMITH in 1925 in Fremantle, WA. Christina appears in the Electoral Rolls in Victoria under the name of FORSAITH from 1919 until 1927, then as BOYNTON (1939-1943) in Sth Australia.2

(1838 - 1923)
Pedigree Chart (interactive)
Clara Elizabeth FORSAITH was born on 18 August 1838 in Shoreditch, London, Middlesex,1,3 and was baptised on 12 September 1838 at St Leonards in Shoreditch.2
The siblings Clara and Ada were listed in the 1841 census at 190 Shoreditch in St Leonards Shoreditch, Middlesex, with their parents, William Smyth FORSAITH and Clara Lydia Bolton TWYNAM.4
She was attending the Desboro House School, Finsbury at Paddington at the time of the 1851 UK census along with her sister Ada.5
She was listed in the 1861 census, visiting the household of Richard SHAW (a ship broker) at Valencia Villa in Hampstead, Hampshire.6

She married Hugh Phillips VIVIAN at the Parish Church in Camborne, Cornwall, on 6 October 1869.7,8,9
She was listed in the 1871 census, visiting the household of Julia BICKFORD with her spouse Hugh at Bessy's Cove in St Hilary, Penzance, Cornwall.10

She was listed in the 1881 census at Pengegon House in Camborne, Cornwall, with her husband Hugh; he was a brass and iron founder. Their children Clara, Godfrey and Herbert were listed as living with them.11

She was listed in the 1891 census as Head of Family at Pengegon House in Camborne, Cornwall. Her daughter Clara was listed as living with her.12

She was listed in the 1901 census at Pengegon House in Camborne, Cornwall, with her husband Hugh; he was a merchant in iron, coal, timber. Their child Clara was listed as living with them.13

She was listed in the 1911 census at Pengegon House in Camborne, Cornwall, with her husband Hugh; he was now an estate agent. Their child Clara was listed as living with them.14

She was appointed executrix of Hugh Phillips VIVIAN's estate in Bodmin, Cornwall, on 17 June 1913.16

Her will was probated in Bodmin, Cornwall, on 30 May 1923 with Clara Eveline Bickford VIVIAN appointed executrix of effects valued at £342/10/6.17