In the early 1850's Edward Gibbon WAKEFIELD promoted his concept of establishing a Church of England colony in New Zealand, which apparently fired Joseph's imagination. However, his father (Joseph Benjamin HEYWOOD) insisted he first learn a trade. Joseph senior ran a varnish and paint company (Wilkinson, Heywood and Clarke) in King’s Cross and arranged for his son to learn carpentry for a year at a carriage works. It seems likely it was the one owned by David IVALL, as Joseph's company probably supplied him with varnish for his coaches, and this is how Joseph came to meet his future wife, Emma IVALL.2

He emigrated to New Zealand, leaving London on 27 February 1851 on the Steadfast (524 tons) which had been chartered by the Canterbury Association, and arrived in Lyttelton on the 8 Jun 1851, a voyage of 101 days.
He had made a flat pack house (with a loophole in each wall so he could shoot at the Maori), which he took with him on the Steadfast.2

In 1853 Joseph returned to England hoping to become engaged to Emma, who was then finishing her schooling in France. They did become engaged and he returned to New Zealand.
It appears he had travelled with two friends to New Zealand and that they set up a store which traded until at least Dec 1853 In Lyttelton. But in Jul 1855 notices appeared in the Lyttleton Times stating that the partnership between Edward Watson TIPPETTS, Alfred SILK and Joseph as storekeepers and general commission agents was dissolved by mutual consent on 25th March 1855.
Shortly after he returned to England to finally marry Emma.2,3

He married Emma Ivall, daughter of David Ivall and Martha James, at Parish Church in Hammersmith, London, Middlesex, on 15 May 1856. They spent three months travelling on the Continent for their honeymoon, before leaving for New Zealand.4,2

On his return to New Zealand he was involved in a number of entrepreneurial pursuits - first as Secretary to the Canterbury Land, Building and Investment Society (Oct 1857) and as manager for the Canterbury Steam Navigation Co (Mar 1858) which was engaged in the transport of goods along the New Zealand coast and for which he built a wharf at Ferry Rd. This gave him a natural benefit of providing storage facilities for the shipped goods.

The family lived in Lyttleton until 1861 and then moved to Avonside and later to Armagh St W, Christchurch.

Emma and Joseph visited England in 1864 where their daughter Katie was born, but unfortunately the child died 7 months later in July 1865 and was buried in the IVALL family grave in Kensal Green Cemetery. Emma and Joseph returned to New Zealand arriving in Dec 1865.

Severe storms in the late 1860s meant that station owners were unable to pay their debts to Joseph (by then a merchant as well as a shipping agent). He, like others, became bankrupt and had to sell a piece of land in Hereford St, Christchurch that had been allocated to him when he emigrated. Joseph later paid all debts and retained his business.

His company was chief agent of the Norwich Union Fire Insurance Society from 1872, and he was also a director of the Provincial Investment Society and Christchurch Gas Company. He was also involved in setting up an Art Gallery in Christchurch and supported local artists.6,7,2 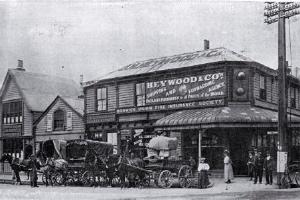 An active Anglican, he was by the late 1850s superintendent of the Sunday School at Holy Trinity, Lyttelton, later doing similar work at Avonside. In 1869 Bishop Harper licensed him as a lay reader and he was active in the Burwood-New Brighton area before priests were resident there. He paid for the design, in England, of a stained glass window for the eastern end of All Saints’ church, Burwood, although it had not arrived when the church was opened in 1877.

He was a lay reader at West Melton, Sumner, Sunnyside Asylum and the Jubilee Home for the aged, and a founder and supporter of the Christchurch branch of the YMCA.

In 1904 he was collecting funds for a pilgrims’ memorial window in the apse of Christchurch Cathedral, but died before completing the task and his family gave the balance of the money needed as a memorial.10

He signed a will dated 1 September 1904 in Christchurch, Canterbury, in which he appointed a William Henry Hargreaves and a Frederick Henry Pyne as executors and trustees. Attached to the will was a curious "Memorandum of Instructions to my Executors and Trustees under my Will and Settlement for their Guidance" which laid out various disbursements. These were: £50 to his daughter Lizzie to 'enable her to pay current liabilities'; £3000 each to his unmarried daughters Lizzie and Emma, subject to them not spending this principal sum without advice from the Trustees; and £1500 to his married daughter Mabel Lea. If the estate could not pay these amounts, then the estate was to be divided intp 5 equal parts with Lizzie and Emma receiving 2/5 each and Mabel 1/5. Any residue was to be distributed equally amongst all his children, with Henry Martin required to use it to pay off advances on his life policies and Ernest Edward required to reduce the mortgage on the house "Ivall" in Halton Rd, Papanui. Finally his two daughters-in-law (Lily and Kitty) were to receive £10/10/- as 'a token of his love for them' and the trustees £15/15/- each for their diligence. In fact, a residual estate of £6692/10/4 did exist, but doesn't appear to have been distributed exactly as Joseph laid out.11

His will was probated in Christchurch, Canterbury, on 4 November 1904 to the executors HARGREAVES and PYNE, who were required to submit an inventory by 4 Feb 1904 and final accounts by 20 Oct 1905, although they were actually completed in Nov 1904. The will was also probated in London on 12 Nov 1909 with English effects of £200.11,12

Kate died in July 1865 at 90 Hereford Rd in Bayswater, London, Middlesex.3 She was buried on 15 July 1865 at the All Souls Cemetery, Kensal Green in Kensington.3
Copyright © 2011-22 by Don Ferguson. You may copy this information and make derivative works as long as you credit www.fergusontree.com for the original materials.

Lizzie died on 2 March 1949 in Christchurch, Canterbury.2,3 She was buried on 3 March 1949 at the Woolston Cemetery, Rutherford St.3 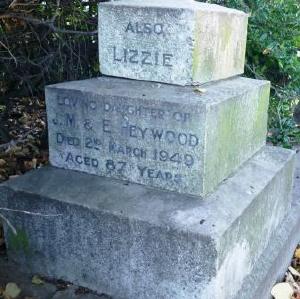 Grave - Lizzie HEYWOOD (1861-1949), Woolston Cemetery, Christchurch, NZ
Copyright © 2011-22 by Don Ferguson. You may copy this information and make derivative works as long as you credit www.fergusontree.com for the original materials.

She married Thomas Cholmondley Sanderson in New Zealand in 1895.3 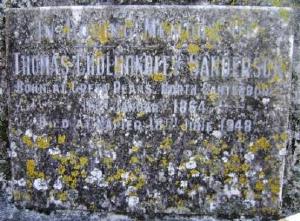 He married Harriet Wicks, daughter of Sidney Buckingham Wicks and Harriet Tippett, in New Zealand in 1916.1

She married Richard Buckingham at St John the Baptist in Little Marlow, Buckinghamshire, on 30 October 1810. Richard was cited as a widower and may have previously married a Hannah TAYLOR on 12 Jul 1807 in Bisham, Berkshire, but there is no evidence found as to her death before 1810.2

She was listed in the 1841 census at Marsh Farm in Wycombe, Buckinghamshire, with her husband Richard; he was a farmer. Their children Maria, Richard and Marie were listed with them.4

She was listed in the 1851 census at Smith End Sq in Long Crendon, Buckinghamshire, with her husband Richard; he was a grocer and draper, employing a man and a boy. Their child Marie was listed as living with them.5

She was widowed at age 73 on the death of her husband Richard on 4 September 1857.6,7
She was listed as the mother-in-law of Purton Weston in the 1861 Census at 20 Queen Sq in High Wycombe, Buckinghamshire.1

Patience's death was registered between January 1863 and March 1863 in Wycombe, Buckinghamshire.8

(1884 - 1977)
Pedigree Chart (interactive)
Elizabeth Martha Hildreth was born in Maidenhead, Berkshire, on 2 November 1884.2,3,4,5
She was listed in the 1891 census at White Hart Rd in Maidenhead, Berkshire, with her parents Owen and Sarah Hildreth and five siblings; her father was a cycle smith.5
She was listed in the 1901 census at 'Fieldhead' in Bourne End, Wycombe, Buckinghamshire, as a nursemaid in the household of Rudolph Chambers Lehmann, who was a Liberal politician (1906-10) and a major contributor to Punch magazine.6

Elizabeth's marriage to Harold Buckingham Wicks, son of Richard Robert Wicks and Emily Dunn, was registered between October 1906 and December 1906 in Maidenhead, Berkshire.7

She was listed in the 1911 census at Wickham Lane in Wooburn Green, Buckinghamshire, with her husband Harold; he was a cabinet maker, working on his own account. Their children Ronald and Geoffrey were listed as living with them.8

She was listed in the 1921 census as Head of Family at Burke Cottage in Cookham Rise, Cookham, Berkshire. Her children Ronald, Geoffrey, Thora and Mary were listed as living with her.10

She was listed in the 1939 Register at 9 South View in Cookham Rise, Cookham, Berkshire.11

Elizabeth's death was registered between April 1977 and June 1977 in Windsor, Berkshire.12

Daisy died on 4 October 1959 in Greymouth, Westland, at age 62.5,2 She was buried at the Karoro Cemetery in Greymouth.6

Mary's second marriage was to Joseph Bennett Edwards, son of Joseph Edwards and Jane Isa McInnes, in 1939 in Glasgow, Lanarkshire.4

Mary died on 11 March 1952 in Glasgow, Lanarkshire, of lymphodaema. The informant was her husband Joseph.5